Phase 1 (2011-14): SGV Regional Bicycle Master Plan
The San Gabriel Valley is home to over 30 jurisdictions, many of which are small in size and lack bicycle planning or infrastructure of any sort. Local residents that wish to cycle tend to cross multiple jurisdictions when commuting to work, shopping, or conducting everyday tasks, increasing the importance of developing city-level bike plans that will form a cohesive, inter-connected network of bicycle infrastructure for the region.

In early 2011 this reality prompted BikeSGV organizers to recognize that the region was an ideal candidate for a regional master plan, similar to the one developed by seven South Bay cities in 2010-11. In the following 2.5 years BikeSGV educated local decision-makers, key stakeholders, and members of the public about the merits of regional coordination in the San Gabriel Valley in the realm of bicycle planning, while simultaneously seeking funding opportunities to make this vision a possibility for communities without the resources to individually hire bike master plan consulting teams. Examples included the submission of a CalTrans grant proposal by the City of Baldwin Park in April 2012 which included the Cities of El Monte, South El Monte and Monterey Park.

Three months later in July 2012, BikeSGV joined forces with SGV-based public health non-profit Day One, Inc. and five cities - Monterey Park, San Gabriel, Baldwin Park, El Monte and South El Monte - to submit a grant proposal to the Los Angeles County Department of Public Health's PLACE Program. One of over forty proposals submitted, the San Gabriel Valley Regional Bicycle Master Plan initiative was invited in fall 2012 to the round of 16, which consisted of a panel interview. The aggregate scores of the collaborative's written proposal and interview were then tabulated and ranked. At the end of the process, the Day One/BikesGV led proposal was incredibly fortunate to finish among the elite 8 and "in the money."

Project Goals
Phase 1 Timeline
The project kicked off on May 15, 2013 and concluded when the 5th and final City adopted its completed Bike Master Plan in Fall 2014. Unfortunately Congressional budget cuts ended the program's funding two years into a four year program. As a result, BikeSGV was not able to complete project goals 3 and 4 listed above.

For more info, or to download a copy of the phase 1 plan, visit the SGV Regional Bike Maste﻿r Plan page.  ​

Following the successful adoption of the 5 city-level plans in phase 1, project organizers worked with the San Gabriel Valley Council of Governments to submit a follow-up proposal with 5-more communities lacking local bicycle and pedestrian master plans.  On May 20th, 2014 BikeSGV organizers mailed away 6 copies of an ambitious proposal -- the San Gabriel Valley Regional Active Transportation Planning Initiative -- that would build upon and accelerate ongoing efforts to realize a more bike-friendly region. Developed by BikeSGV in partnership with the San Gabriel Valley Council of Governments (lead applicant) and the Cities of Glendora, La Puente, Irwindale, Monrovia, and Montebello, the proposed multi-jurisdictional initiative was composed of the following elements, selected based on their ability to positively impact some of the region’s most pressing safety, public health, and environmental problems:


In Fall 2015 the CA-Active Transportation Program (Cycle 1) awarded the project funding. In Spring 2017 a consulting team composed of Alta Planning, KPFF Engineering, and BikeSGV was selected to implement the proposal. The 18 month project officially kicked off in June 2017, and is slated to conclude in Fall 2018. 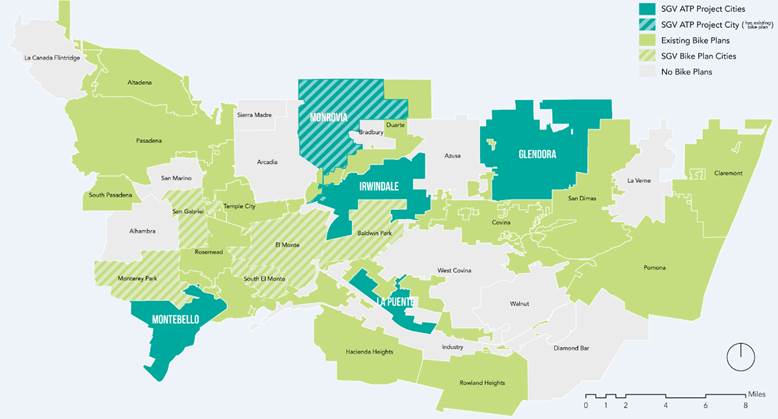 The Goals of the SGV Regional Pedestrian and Bicycle Master Plan are to:

1. Support walking, bicycling, and other forms of 'active' transportation to encourage healthier lifestyles.

3. Identify the 50 most feasible miles of future 'greenways' - protected, off-street walking and biking paths - along the San Gabriel Valley extensive network of waterways and storm channels.